April 2019
Voxel.js Next
Check out the Voxel.js reboot
May 2016
Getting Started With Node For Distributed Systems
Where to get started with streams and peer to peer
July 2015
What's the deal with iot.js and JerryScript
Node.js will soon be running on tiny low power chips
July 2015
Electron Fundamentals
A quick intro to Electron, a desktop application runtime
May 2015
HD Live Streaming Cats to YouTube with the Raspberry Pi Camera
A how to guide
May 2015
Interdisciplinary Open Source Community Conferences
A list of community organized events
April 2015
Setting up HTTPS with a wildcard certificate and Nginx
How I set up HTTPS with Nginx
April 2015
A Month of Modules
Modules Mafintosh and I wrote this month
February 2015
Tessel Powered Plant Watering System
Make an HTTP accessible water pump
January 2015
Portland Fiber Internet
Review of 1Gb fiber from CenturyLink
January 2015
node-repl
An interactive console for node
January 2015
Nested Dependencies
Insight into why node_modules works the way it does
July 2013
Node Packaged Modules
Bringing NPM modules to the web
March 2013
Kindleberry Wireless
A Portable Outdoor Hackstation
January 2013
Bringing Minecraft-style games to the Open Web
A status report from the one month old voxel.js project
November 2012
A Proposal For Streaming XHR
XHR2 isn't stream friendly. Lets explore why and propose a solution!
October 2012
Scraping With Node
Useful modules and a tutorial on how to parse HTML with node.js
October 2012
Building WebView Applications
Things I learned while building @gather
May 2012
Fast WebView Applications
How to make web apps feel fast and responsive
April 2012
Node Streams: How do they work?
Description of and notes on the node.js Stream API
December 2011
Gut: Hosted Open Data Filet Knives
HTTP Unix pipes for Open Data
July 2011
Little Coders
Elementary school programming
Kindleberry Wireless

An updated, wireless version of the kindleberry using the kindle paperwhite

Recently I got to go down to Australia to attend an awesome conference called CampJS. It isn't really a conference, actually, but instead a bunch of programmers in the woods for a few days hacking on side projects and learning new things. Getting out of the big city was really refreshing and at the same time made me realize how badly my glossy screened laptop works in the great outdoors.

It got me wondering if there existed a laptop that was designed for hacking in direct sunlight... something that had a ridiculously long battery life and was still readable in high brightness situations. Instead I stumbled upon a more awesome solution: the kindleberry, a combination of the Raspberry Pi and the Amazon Kindle.

The advantages of the kindleberry are pretty desirable for me: 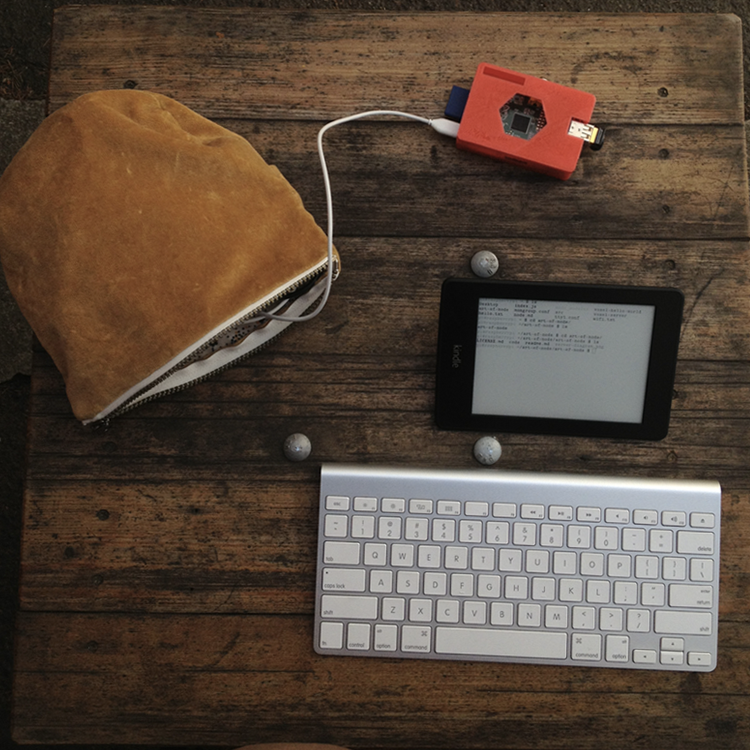 The idea of the kindleberry is to have the kindle just act as screen and have it log into an ssh session on the pi. Then you can plug a keyboard into the pi and it when you type it will show up on the kindle screen. This approach pretty much only works for terminals so you can't do anything except edit code in vim. I like this limitation as it gives me an option that is free from distraction for writing long pieces of code or text.

Since the screen on the kindle is e-ink it has a slower-than-normal refresh rate. If you are a touch typist this shouldn't be an issue, I would recon that between the wifi latency and the screen latency there is a ~200ms screen delay, but it doesn't bother me at all when typing.

The first problem I ran into was that the kindleberry instructions only worked on Kindle 3 devices, and the newest generation of Kindles (e.g. the paperwhite) are Kindle 5's. While the end result is similar this just means that essentially all of the steps to set up and install the peripherals correctly were different, including the terminal software that runs on the kindle. The other issue was that I wanted a totally wireless version: no cords between the keyboard, kindle or pi.

Here is a list of physical parts that I am using in my setup: 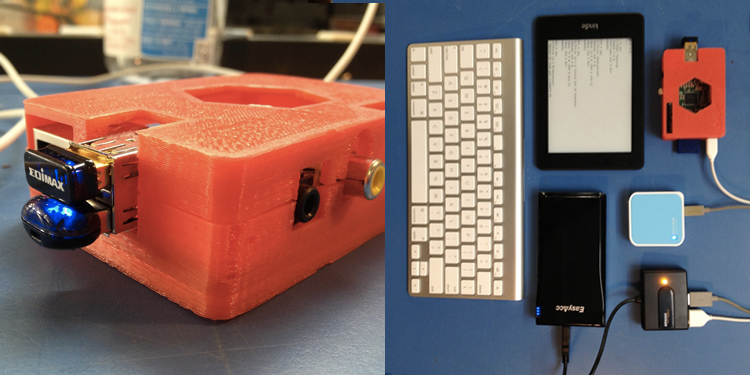 For the software side of things, the best resource is this nice tutorial that Rod Vagg has put together for getting the paperwhite set up with a terminal emulator. He even compiled node.js 0.10.0 for the kindle as well!

My pi is configured to boot up and join the wifi hotspot that the TP-LINK router creates, then I can have the kindle communicate to the pi over wifi. There is probably a way to ad-hoc them together automatically but having a little hotspot is handy for other things like too like mobile web app development.